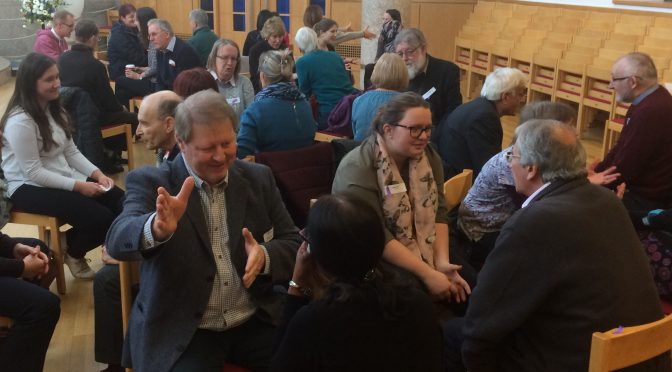 “It is so important to talk to new people,” wrote one participant at the end.  “We are often so busy in our own world, jobs that it takes someone to set up an opportunity for us to be able to have the time and space to meet other people from all walks of life in MK. It can only serve to bring communities together.”

Another participant wrote:  “It’s really opened up my eyes to the diversity of people, faiths and groups in Milton Keynes and how many community and charitable organisations there are which are dedicated to the social cohesion and celebration of them. Perhaps this is what makes MK so different. We’re not just roundabouts and concrete cows after all!”

“It was lovely to talk to so many interesting and MK committed people,” said Sir Henry Aubrey-Fletcher, Lord Lieutenant of Buckinghamshire.

“The feedback has been wonderful,” said Alan Bainbridge, of MK Quaker Meeting, who chairs the Weaving Trust campaign team and facilitated the event.  “It was marvellous to stand on the podium and gaze down to see 90 people engaged with each other and so obviously enjoying the experience, and clearly getting a lot out of it.”