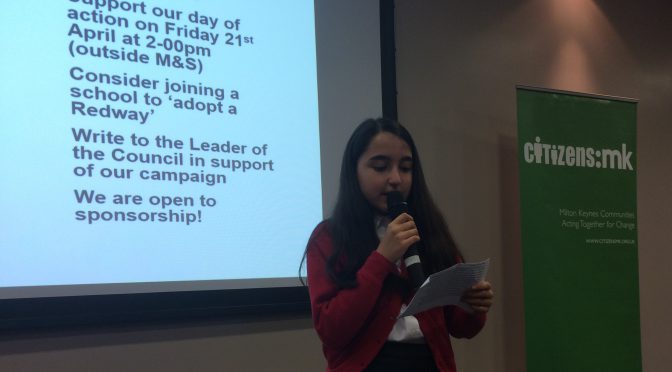 “As a group of students we want to improve the Redways because many of us use them to go to and from school and we want them to be cleaner and look better,” said one of the pupils. “We think more people across Milton Keynes will use the Redways as a healthy way to get around if they are better cared for.”

“As children and young people we are fed up with the litter, broken glass and other rubbish dumped by selfish people and we want to clear it up,” said another pupil.  “At my school our school council are willing to look after the Redway next to our school and we have already started to pick up litter and think about ways to make it a better route to the city centre.”

Six local schools, all members of Citizens:mk, have organised a day of action for Friday 21st April at 2pm.  The schools will be walk along the Redways to the city centre to ask the Leader of the Council to pledge the Council’s support for the campaign goal of 50 improvements to the Redways in MK’s 50th birthday year.

Business leaders and their employees were invited to join the action on 21st Apil – also to help a school on a Redway litter patrol at a later date and sponsor a sign to show they support a local school taking care of their Redway.

“I was really impressed with the children today,” said Tony Berwick, “and they put their case across to the business leaders with style.  We now hope the wider community here in Milton Keynes will support this campaign.”