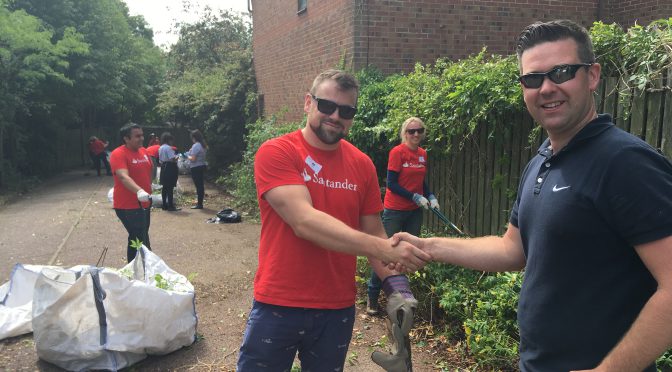 On Monday 26th June, 16 staff from MK’s Santander office spent a full day clearing over-grown bushes from a Redway path used by hundreds of pupils from St. Paul’s Catholic School.  It was part of a ‘Discovery Day’ scheme through which Santander encourage their staff to engage with the local community.

It was also a vital action day for the Citizens:mk Redways Relaunch campaign, with students wearing ‘Redway Warriors’ t-shirts and using litter-picking equipment purchased by Santander.

“We’ve coordinated well as a team.  It was so over-grown, litter everywhere!” said Luke Farrell, Contracts Manager at Santander, who spoke at the big outdoor meeting with the Leader of the Council on 21st April.

“Suddenly this whole redway has opened up and all it’s taken is some people wanting to do it and a little bit of time.  All of my team has gained something from today just by being among the pupils and getting positive comments from the wider community.  It’s probably the most beneficial Discovery Day we’ve done so far.” 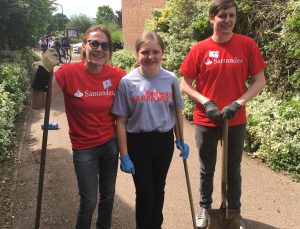 14-year-old pupil Tegan Dodimead said:  “It was great working with the Santander people.  They’re so friendly!”

A younger pupil, walking through on her way out of school at the end of the day, said:  “Wow, it’s got so much wider (the Redway path)…I feel safe now.”

“Working with the Santander team has been amazing,” said teacher Meghan Jones, who co-ordinated the action.  “We’ll definitely be doing more together.”

Another Santander staff member, Alan (pictured below), was happy to put in the extra effort because he’s training for a triathlon! 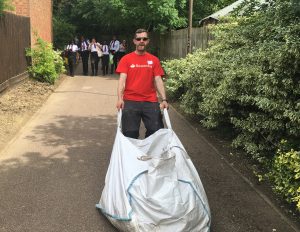