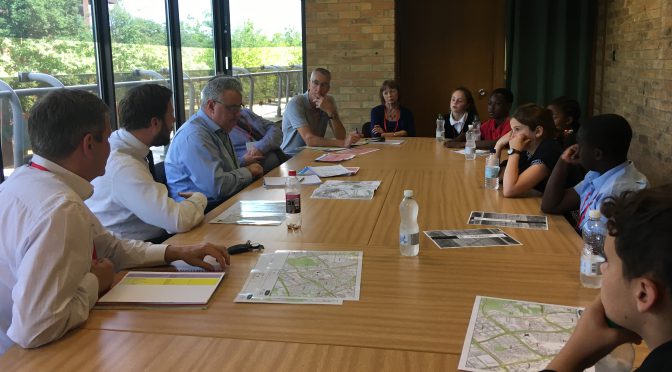 This was the second formal meeting between pupils and the main power-holders in Citizens:mk’s Redways Relaunch campaign.  The schools represented in the negotiations this time were MK Academy, St. Monica’s and Summerfield Primary School.

Sean Rooney explained that his team had been researching the feasibility of the Redway improvements proposed by pupils at the last meeting, and that most would be implemented.  The changes will include new lamp posts, clearing bushes and applying new surface treatments.  He said these would be detailed in a RAG-rated list, including improvements on Parks Trust land, and this would be shared with the schools for accountability.

Sean Rooney pledged that works would begin this summer and some of the new lamp posts would be ready this autumn.

He also proposed that pupils could design with individual school branding the heavy-duty stickers that would be used on lamp posts to identify the relaunched Redways surrounding each school.

“We have listened to you,” he told the pupils, “and we need to keep on listening”.

Councillor Marland said:  “The 50 improvements you want could be 500 improvements if we involve other schools and some of the businesses you are working with.”  Various business partners are already engaged in the campaign – Dentons, Network Rail, Santander, Shoosmiths –  and the meeting agreed it would be good to engage them further.

“Let’s do this across MK,” said David Foster.  “It’s unusual to hear directly the voices of young people…and we want to hear more of them.”   Rob Riekie offered that Parks Trust staff could walk with pupils around the Redways on Parks Trust land to look at other ways they can be made safer.