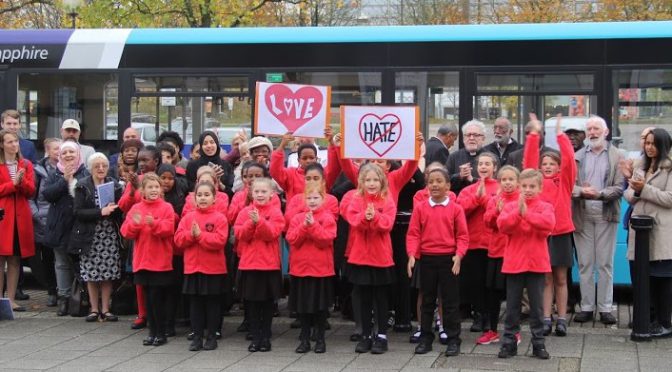 Children from Summerfield Primary School sang to the chief police officer and other city leaders at the city church in a plea for more action on hate crime.

In a day of action organised by Citizens:mk, as part of national Hate Crime Awareness week, the school choir sang a specially composed song, ‘Love is stronger than hate’.   See video.

“People look different, but inside we’re all the same,” the children sang.  “If we stand up strong together, we can stamp out hate forever.”

Clapped on by 75 supporters from 16 MK faith, education and business organisations, the song helped to secure specific pledges of further action from city power-holders.

Earlier the audience heard a series of testimonies from victims of hate crime, including  male and female muslims who had experienced Islamophobic hate against them and a gay man who had been assaulted in a club for dancing with his partner.

Bart Gamber, Director of Programmes at MK Community Foundation, reported that there has been a 25% increase in reports
of race-based hate crime in Milton Keynes since 2015.

After the children’s song, Yvette Hitch, Superintendent LPA Commander of Thames Valley Police (pictured below), pledged to organise a workshop on restorative justice and nominate a liaison officer to monitor and meet with Citizens:mk quarterly. 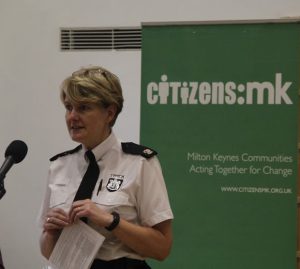 Hannah O’Neil, Deputy Leader of the Council, pledged to host two Healing through hearing events for victims of hate crimes and send two representatives to the new restorative justice workshop.

Fidele Mutwarisibo, who leads the Citizens:mk Fight Against Hate campaign team, said: “Milton Keynes is a great place to live and work, but there has been a 14% increase in reported hate crime over the past year and we must work together to do something about it.”

As part of the Day of Action, two large banners featuring the children’s ‘love is stronger than hate’ posters, were hung from the front of Church of Christ the Cornerstone.  The Rev John Robertson, Director of MK Mission Partnership, officially unveiled them.

Citizens UK’s Esmat Jeraj, who presented the ‘Missing Muslims’ report published earlier this year by the national commission on Islam, Participation & Public Life, said:  “It was truly an inspiring event, with strong and diverse turnout from individuals of all ages and backgrounds (from the LGBTQ alliance to the Church and Mosque). The passion from all those speaking was evident and reflections from attendees was that this was an uplifting and inspirational event.”

Click here to hear ‘Love is stronger than hate’ by the choir of Summerfield Primary School.

Click here to see design of posters on Arriva buses

For further information about the Citizens:mk Fight Against Hate campaign, click here.