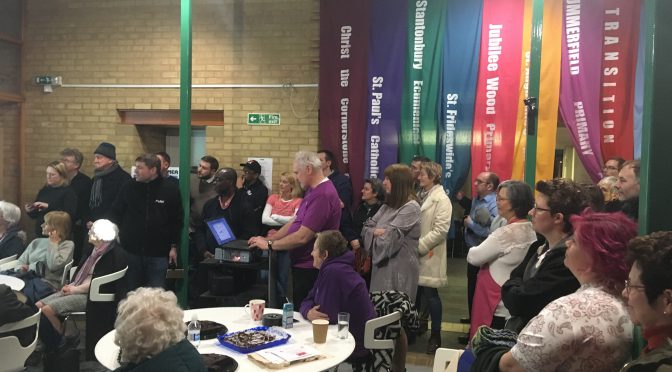 Citizens:mk partnered with YMCA Milton Keynes for a day of action to promote awareness and support for the new strategy of MK Homelessness Partnership and MK Council in addressing homelessness in MK.  The aims of the Day were to:

At 7.30pm, guests had an opportunity to quiz those in positions of leadership in addressing homelessness:  Cllr Peter Marland, Leader of the Council; Gamiel Yafai, Chair of MK Homelessness Partnership; Simon Green, CEO of YMCA MK; Lawrence Morgan and Suzanna Raymond of the Citizens:mk House the Homelessness campaign.  Guests enjoyed asking questions about the recommendations in the Strategic Review and their personal experiences of developing and delivering them (Cllr Marland pictured below). 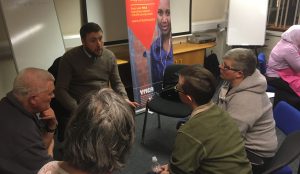 At 9pm, 55 guests attended a House the Homeless Assembly at which Gamiel Yafai received a Citizens:mk Gold Award for MK Homelessness Partnership (pictured below) for developing a strategy with the goal of ending homelessness in MK.

Towards the end of the Assembly, a film was shown of Summerfield School Choir singing a song about homelessness, ‘We Will Fix You’.

After the Assembly, Ian Roberts and band played live music to entertain Sleep Easy volunteers as they prepared to bed down in the cold to raise money for YMCA.  Although the temperature didn’t get below freezing until 6am, the one-night volunteer ‘rough sleepers’ felt the chill and discomfort of sleeping rough in winter.   Click here if you would like to contribute to their fund-raising.

Truby’s Garden Tea Room, sponsored by Meals by Malik – a local Muslim Woman caterer) and the owner of a small Muslim led printing company Good Response, provided meals for those sleeping out and refreshments for those attending the Assembly.