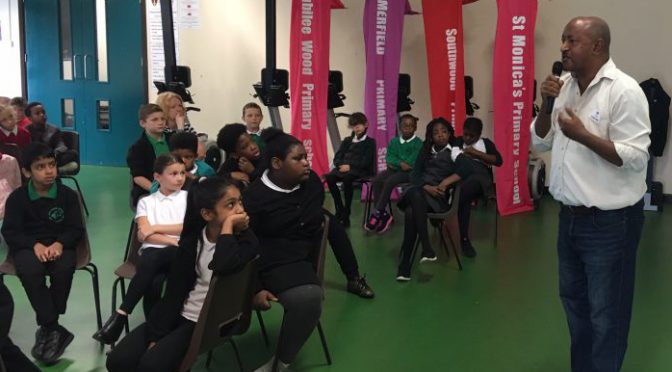 The theme for the Training was Refugees Welcome.  The pupils heard testimonies from two Syrian teenagers who were welcomed in Milton Keynes two years ago; also from British Red Cross, who facilitated their settlement and Ian Fraser, Head Teacher of Summerfield School, who was involved in welcoming refugees in his previous MK primary school.

The pupils discussed and voted to campaign for the following:

The pupils prioritised the number one shared goal of ‘becoming a Refugees Welcome School’ with the aim being to persuade their number one power-holder, i.e. head teacher and/or chair of governors, to formally agree it.

They then drew up power analysis maps to identify the key power-holders, and discussed ideas for acting on their interests to achieve the campaign goals.

Click here for the programme of the day.  Pictured is Bekele Woyecha of Citizens UK and Sponsor Refugees.