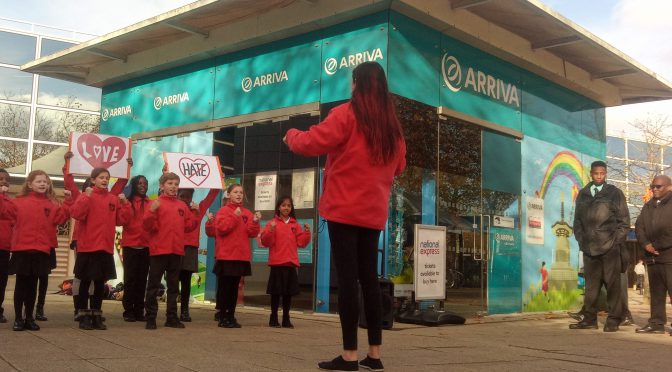 On Tuesday 13th November, pupils from Summerfield Primary School took part in a public action to raise awareness of hate crime in MK.  While pupil councillors met and got pledges from a range of local power-holders, the school choir sung an original song, ‘Love Is Stronger Than Hate’ (music and words by teacher Nikki Elgar), to attract attention.  The action, which took place at the Arriva Buses booth opposite The Point in CMK,  was organised as part of Citizens:mk’s Fight Against Hate campaign, and filmed by BBC TV Look East.

Campaign leader Fidele Mutwarisibo of Church of Christ the Cornerstone and The Open University first introduced Richard Solly and Sgt Catherine Story of Thames Valley for an update on statistics which show a recent increase in hate crime in MK.  Then Summerfield School councillors Harry and Maureen explained why kindness is important in their school and why they are taking action to reduce hate in the community, and personal testimonies of shocking hate incidents witnessed were heard from teacher Mrs Elgar and pupil Sofia.

Jennifer Parsons of MK Muslim Association spoke of her own direct experience of a painful hate incident on a public bus and Johnson, a bus driver from Arriva Buses, spoke of his own experiences of receiving hate abuse while on the job in MK.

The Summerfield pupils then gave thanks and a gift of sweet biscuits to the Arriva bus drivers for sharing with their colleagues at the bus depot as a small token of thanks for Arriva’s work in publicising their campaign with posters on the buses recently.

Towards the end of the action, the following pledges were made: 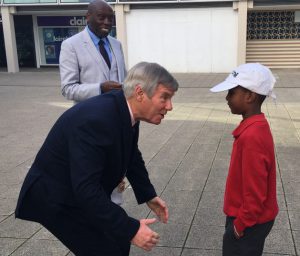 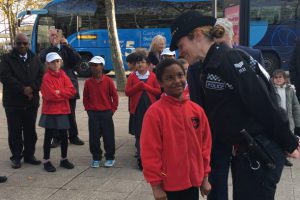 “Today’s young people have a deep sense of injustice,” said Fidele Mutwarisibo.  “This is their way of telling adults about the kind of community they want to live in.”

“It’s important to us that all passengers and drivers feel safe on our buses,” said Arriva Buses Manager Kieran Lawson in a statement made earlier (as he couldn’t attend on the day).  “Not only have we displayed posters showing who to call if you experience hate crime, Arriva Buses have also pledged to train all our drivers in ways to react safely and effectively to hate crime.”

“The children have reminded us how important it is to stand up for what is right,” said Fidele.  “Being hateful is simply wrong and helping others away from hateful behaviour is something we can all play a part in. “ 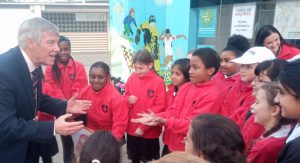