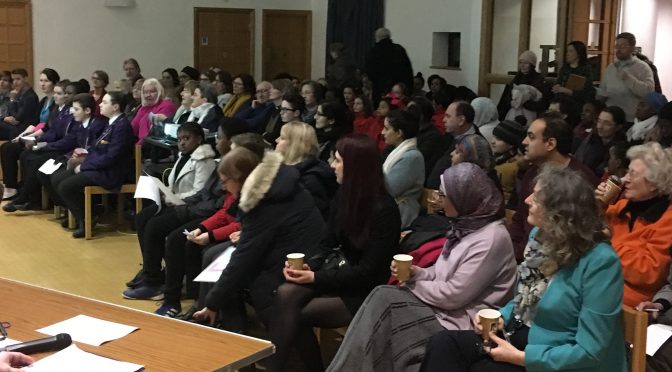 109 delegates from 15 member institutions attended our annual Delegates Assembly at Church of Christ the Cornerstone on Tuesday 5th February 2019.

RAG-rated updates on 2018-19 campaign goals were presented including a video message from Dr. Fidele Mutwarisibo, leader of the Fight Against Hate campaign.

Sixth form students Zainab Athumani from The Radcliffe School and Fraser Sones and Dylan from Stantonbury International School presented their recent experiences of Citizens:mk’s new ‘Anger to Action’ course, funded by MK Community Foundation. Headteacher Kate Matthews led Southwood Primary School students in presenting their experiences of meeting with the Leader of the Council to raise the issue of the broken steps outside the school main entrance.

The choir of Summerfield Primary School then gave a first ever public performance of their new Refugees Welcome song.

After a short break and 121s, three campaign proposals were put, each with SMART goals as follows:

Delegates gave full consent to these campaigns being given special attention at our Accountability Assembly with power-holders on Thursday 25th April 2019.

In post-event Evaluation, the Assembly was scored 8 out of 10, with two points being dropped due to non-attendance of some members and poor audibility of some speeches.