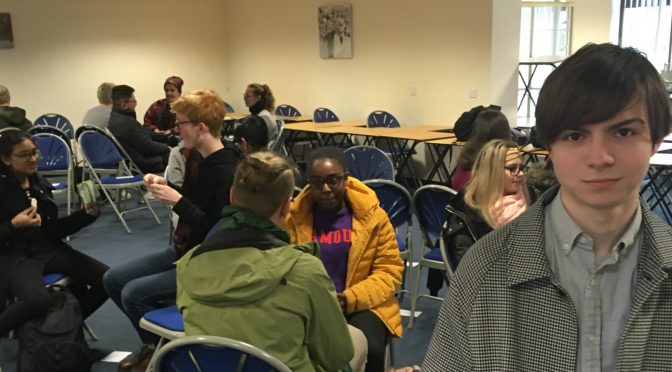 In January Fraser Sones (pictured right), a sixth form student at Stantonbury International, joined other students from Stantonbury and The Radcliffe School in a new ‘Anger to Action’ leadership training course run by Citizens:mk with funding from MK Community Foundation.

When prompted to think about what made him angry about unfairness in his community, Fraser said it was the lack of conversation between students in the sixth form. “I want there to be more meaningful conversations,” he said, “and I’m worried that this isn’t happening due to a lack of social skills relating to greater risk of mental health problems.”

With help from Citizens:mk’s Community Organiser, Fraser conducted research to show that many Stantonbury students had a low number of conversations which students outside their immediate friendship groups…and decided to take action.

He organised a series of meeting with power holders within the Stantonbury Sixth Form, primarily the teachers and managers, for permission to advertise and run a half-hour session of conversation circles. This involved pairs of students talking to one another in a carousel of five-minute conversations about topics they were interested in, including current stresses and future plans.

On the day, 22 students participated and 20 completed evaluation questionnaires which showed:

Not a bad set of data from just 30 minutes of activity!

Some of the participants’ comments afterwards were:

Fraser is in discussion with the power-holders among Stantonbury International staff about which direction to take next with this exciting initiative.

Dave Smeath, Head of Year 12 at Stantonbury International, said: “This unique event was a great success, and a credit to Fraser. I hope that the students who took part will now feel confident to speak to others. I look forward to seeing this work grow”