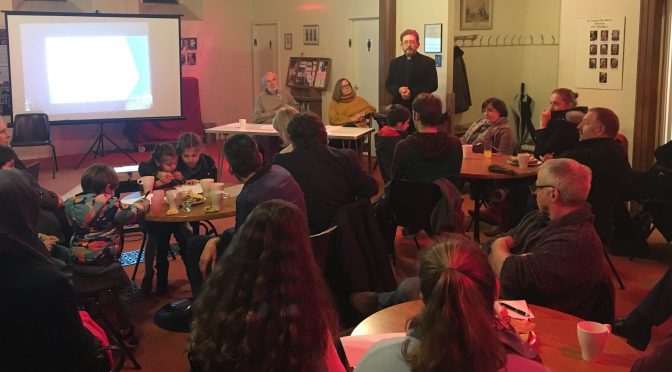 30 members of St. George’s Church and the wider Wolverton community turned out to hear about a proposed Sponsor Refugees initiative. This has grown from a local resident’s offer of a house specifically to be a home for a family fleeing war-torn Syria and would be the first of its kind in Milton Keynes, following other successful initiatives in Canada and elsewhere in the UK.

The initiative follows a Citizens:mk campaign which began in 2015 and, having secured pledges from MK Council, became an independent charity, Refugees Welcome, in 2016.

The meeting was co-chaired by Michael and Tori Snell and heard from a Syrian family who have lived in Wolverton for more than two years following settlement under the government’s Vulnerable Person’s Resettlement Scheme (supported by a previous Citizens:mk campaign).

Rev Gill Barrow-Jones gave background to the initiative and researcher Sarah Dolphin gave the results of a recent survey of Wolverton people which showed 75% were in favour of the initiative. Rev Tim Norwood, co-chair of Citizens:mk, talked about how the scheme has worked elsewhere, the challenges – including the need to raise £9,000 for a two-parent refugee family – and the personal and community benefits of sponsoring a family in this way. Local social entrepreneur Marie Osborne also spoke about what it takes go make social initiatives successful.

It was decided to go ahead with a Sponsor Refugees initiative in Wolverton.

Rev Barrow-Jones said: “I was really pleased with how it went, how engaged everyone was, and how everyone was hanging around at the end chatting!  It was also very powerful to hear from the Syrian family who already live within our parish too.”

If you are interested to know more about MK’s first Sponsor Refugees initiative, and/or explore ways you can help, contact wolverton@citizensmk.org.uk.