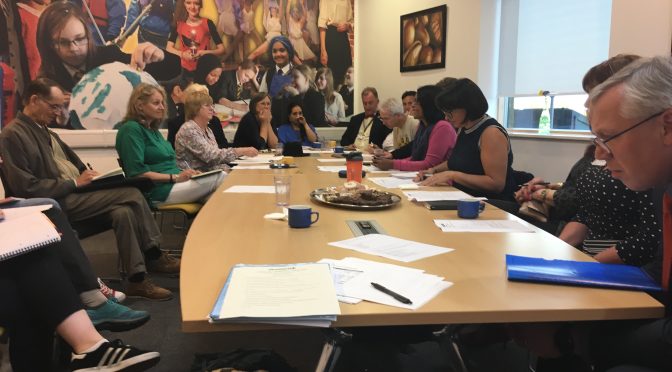 22 people from 8 member and 4 non-member institutions attended the Annual General Meeting on 17th September. The meeting included presentations from:

Other guests included representatives of MK Welfare Association and the University of Buckingham.

11 leaders were nominated and agreed to serve on the Leadership Group in 2019-20, as follows:

Kurshida Mirza and Tim Norwood resigned as Co-Chairs. Kurshida agreed to stand in as Co-Chair until two other members of the Group were nominated and trained to take over.

Following a presentation from Hala Afify, leader of the Fair Work campaign, the Fair Work Listening Campaign was launched with attendees agreeing to promote the new online survey within their institutions, https://www.surveymonkey.co.uk/r/QRRCS79.

Evaluation of the AGM, as an internal action, concluded a score of 8 out of 10.

David Chapman, who attended the AGM representing Church of Christ the Cornerstone, said: “It was frustrating that I was only able to stay for a short while because the mix of people present, from diverse backgrounds and a wide range of different organisations, is so inspiring. I really wanted to hear what everyone had to say. At a time of national stress and conflict, all Citizens:MK events are local oases of hope.”