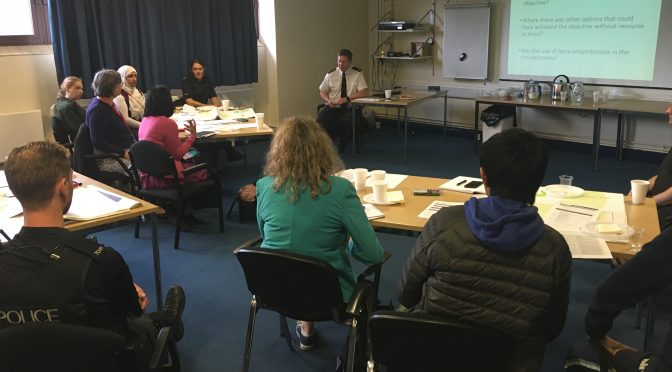 The aim was for leaders of Citizens:mk to understand better the aims, operations and constraints of MK Police, to help their research in planning an agenda for the election of the Police & Crime Commissioner in May 2020; also to help MK Police understand better the experiences of diverse MK community groups and get feedback on ways MK Police can improve its service.

As part of this process, five Citizens:mk leaders signed up to  ‘ride-along’ with MK Police on duty, experiencing it from the back of a police car.

The workshop centred on a ‘table-top’ experience reflecting ‘a day in the life of’ from the perspective of Supt Metcalfe and some of the day to day operational decisions that have to be made regarding professional standards and the deployment of limited resources against assessments of threat, harm and risk.

This included anonymised details from a typical daily management meeting where decisions have to be made regarding missing persons and the prioritisation of activity in response to the previous 24hrs’ events. Also a discussion about use of taser guns.

The workshop ended with ideas for improvement and initial discussion about ways Citizens:mk leaders can involve their institutions in supporting the Police effort.

In closing feedback, participants said they found the workshop illuminating and helpful, they’d have liked it to be longer. Supt Metcalfe said he would be happy to welcome a wide range of citizens to attend a similar worksho to help more people understand how the Police operate.