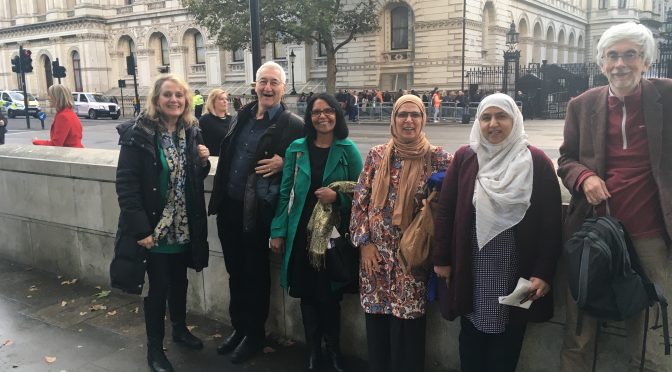 Hala Afify’s team of Fair Work campaigners were disappointed not to see their MP, Rt Hon Mark Lancaster, at the end of their day with Citizens UK in London.

Mark’s PA had explained he was too busy with work at the Ministry of Defence, but campaigners hoped their gift of fresh cookies would give him a break for a few minutes!

In the end Hala and the cookies didn’t get past Reception.

David Chapman of Church of Christ the Cornerstone said: “I know MPs are busy but it is disappointing that my MP seems so hard to get to speak to. We are quite a friendly bunch and would have enjoyed sharing our cookies with him! But it was an enjoyable outing all the same, and hopefully we’ll get to speak to Mark back in Milton Keynes sooner rather than later.”

The team is determined to see Mr. Lancaster, to ask him for advice and support in their campaign to address the issus of unfair dismissal from zero hours contracts and termination of contract by email, and look forward to meeting with him soon.

In photos below, Hala and the team with the cookies and a card outside the MoD. (Note in the photo above BBC reporter Laura Kuenssberg also out and about in Westminster at that time – yes that’s her!)

Of the Citizens UK Delegates Assembly which the team attended during the day, Rob Paton of MK Quaker Meeting said: “It was another uplifting day with Citizens. The agenda we all came up with is quite distinctive. Its politics, Jim, but not as we know it…’