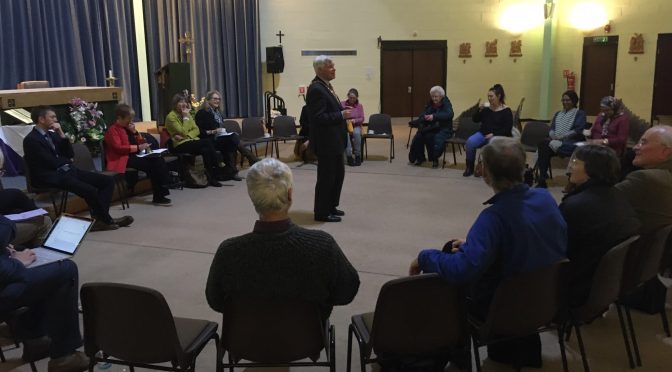 30 people from six member and 4 non-member institutions attended the Fair Work Round Table at St. Augustine’s Catholic Church in Heelands.

The aim was to share issues of inequality at work, build relationships with parliamentary candidates for MK North and, through open dialogue, develop ideas for common goals to which candidates will be asked to pledge commitment at a Parliamentary Candidates Assembly on Monday 2nd December.

After a welcome from Debbie Wilson of MK Quakers and Fr Francis Higgins of St. Augustine’s, and special addresses from Mayor Sam Crooks (pictured) and Ian Revell of MK Community Foundation, who presented latest Vital Signs findings on work and the economy), various testimonies of unfair working practices were heard:

Hala Alify of Trubys Garden Tea Room talked about a lack of transparency of contract and termination processes when she was fired from a zero-hours contract, after more than two years of continuous service, by email.

Marion Cole of Works4Us talked about how her organisation supports workers in this situation.

Rukhsana Malik of MK Muslim Association announced the results of an online survey conducted by Citizens:mk between September and November.

Nick Peacock, Managing Director of Ascendant Recruitment, spoke from a recruitment employer’s perspective. He explained his feelings of discomfort at watching workers being unfairly treated in zero hours contracts.

Wider research on fair work policies was presented by Jane Whild of The Open University and Professor Susan Edwards of University of Buckingham.

David  Chapman of Church of Christ the Cornerstone and Hala Afify of Truby’s Garden Tea Room asked for reactions from guest parliamentary candidates, Charlynne Pullen of the Labour Party and Aisha Mir of the Liberal Democrats (The Conservative Party was invited).

Each was asked to agree to include a statement of support for Fair Work in Milton Keynes. Aisha Mir, the Liberal Democrat candidate, agreed that she would include the Fair Work Team’s recommended statement in her maiden speech:

“Milton Keynes is proud to be a place with good employment opportunities for all, and I will be working with local employers, community groups and Citizens:MK to further strengthen fair work practices in the city. Milton Keynes is committed to ensuring that all workers receive a fair day’s pay for a fair day’s work and intends to lead the way with best practice fair employment contracts.”

Charlynne Pullen, the Labour Party candidate also agreed to include these words her maiden speech, with the proviso that she would add ‘trade unions’ to the list of people she would work with in order to strengthen fair work practices,

Other parliamentary candidates will be asked to make a similar Fair Work pledge, as well as pledges for action on other Citizens:mk campaigns, at the Parliamentary Candidates Assembly on 2nd December.