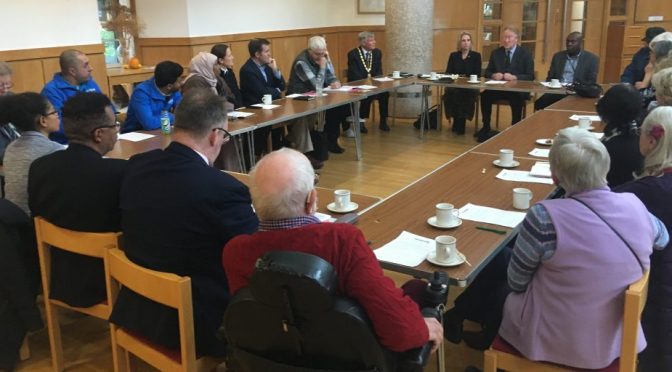 On 26th November, Dr. Fidele Mutwarisibo, leader of Citizens:mk’s First Against Hate campaign, and Julie Upton, High Sheriff of Buckinghamshire, welcomed Citizens:mk and other community leaders to a light lunch with Anthony Stansfeld, Police & Crime Commissioner (PCC) for Thames Valley, at Church of Christ the Cornerstone.

The purpose of the lunch was to find out more about the role and responsibilities of the PCC, and what it’s really like to do the job, from someone who’s done it for nearly 8 years and will be succeeded by a newly elected PCC in May.   Citizens:mk leaders want to be better informed, understand the issues and share their own views to inform and influence the PCC agenda.

This was part of Citizens:mk’s research towards negotiation with candidates for the post at a special assembly for Thames Valley Citizens in Milton Keynes on 29th April (click here for information and to book a place).

“it was a very valuable thing to create space for dialogue helping the Citizens:mk Alliance to work with a broad range of service providers,” said Citizens:mk Co-Chair Kurshida Mirza.

To find out more about how you can contribute to the agenda for PCC candidates at the 29th April Assembly, see this campaign briefing document and/or contact Community Organiser Tom Bulman, tel 07962 838685.