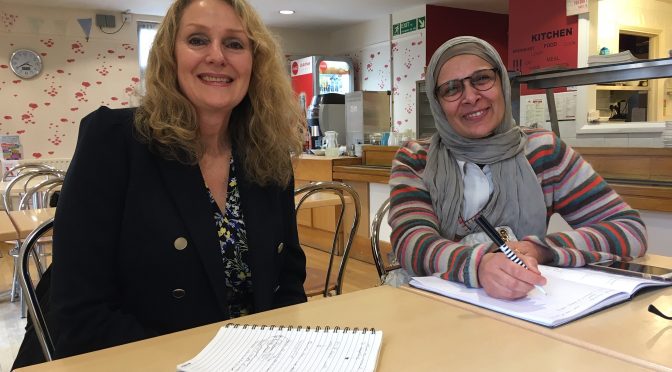 On 13 March, Citizens:mk Co-Chairs Hala Afify and Jane Whild (pictured) met Ben Everitt, new MP for Milton Keynes North, his Communications Officer, Liam Andrews, and Alex Walker, Leader of MK Conservative Group. They thanked Alex for honouring the pledge he made at the Parliamentary Candidates’ Assembly in December, for Citizens:mk leaders to meet within 3 months of the recent General Election.  Also in attendance was Community Organiser Tom Bulman.

During the first meeting rounds, everyone introduced themselves and their interests.

Following that, Tom, Jane and Hala presented our agreed CMK campaign priorities and aims for the Police and Crime Commissioner Assembly.  At the meeting end, all participants agreed it was good to meet in person and that we had established a good foundation for future communication. As a next step, Tom will arrange for Ben to meet the Red Cross and Syrian refugees, who have been supported by our chapter.

In their reflections on the meeting,  Hala said “it was good to meet my MP and to find him attentive and willing to engage. I spoke about the Fair Work campaign that I have been leading for a year and half, and I was able to tell the story of my involvement with Citizens:mk after my dismissal by email.”

Jane commented “it was good to meet Ben and hear about his local priorities as well as the Domestic Violence bill that will be coming before Parliament in the future. Misogyny is a root cause of domestic violence, hence my leading campaign which aims to tackle it. ”

Since the meeting, we learned that the Local Council and PCC elections have been postponed by a year, which means we’ll have to change our plans for 29th April Assembly!  The Leadership Team will consider taking our campaigns to the incumbent PCC.

Finally, we welcome David Chapman, from The Church of Christ the Cornerstone, to the Treasurer role, which he has taken over from Linda McComie.  On behalf of all our members, we thank Linda for doing such a marvellous job as Treasurer over recent years.

David was not present at the meeting with Ben, but having previously participated in the unsuccessful attempts to meet with Ben’s predecessor, Mark Lancaster, David said that he was very encouraged to hear of the positive start to building a relationship with Ben.