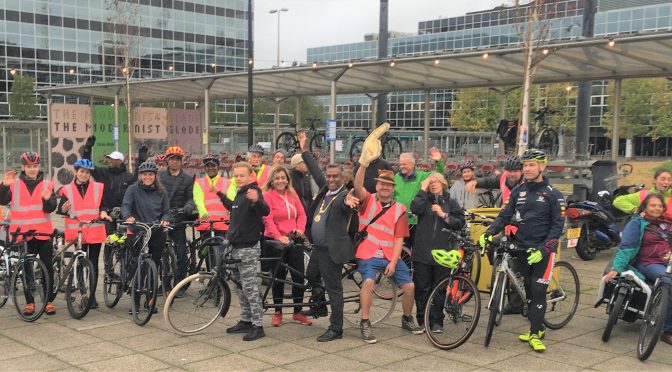 During ‘Cycle September’, MK businesses and schools rode 38,046 miles with 317 riders going out for 3,123 rides (a 170% increase since June). 25 cyclists rallied in Station Square for an awards presentation with MK Mayor Mohammed Khan for the MK Businesses and MK Schools competitions organised by Cycling CitizensMK (see winners and photos below).

Then cyclists participated in a short CMK Cycleround ride through CMK to Campbell Park Light Pyramid and back.

“One of my aims as Mayor is to help MK in its bid for city status,” said Mayor Khan.  “We all know we must develop greener daily habits, and cycling to work and school is something more of us can do.”

Elaine Wales, Community Liaison Coordinator for prize sponsor John Lewis, said: “Congratulations to the winners and well done to everyone who took part in the competition. John Lewis and Partners are once again proud to support Cycling CitizensMK”

This event followed a similar awards rally for Bike Month in June.