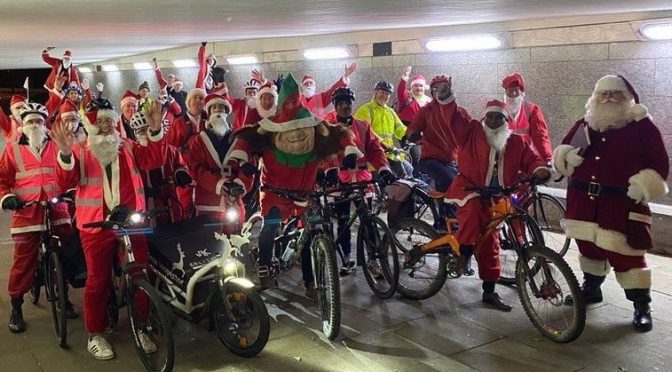 Following big increases in cycling through campaigns earlier this year (Bike Month June and Cycling September), Cycling CitizensMK has been running two Winter Wheelers competitions in December, one for businesses and one for schools.

To celebrate MK’s winter cycling, there was a rally of 34 Cycling Santas in Station Square (video above), the biggest number ever seen in MK and a step towards the world record – maybe an official attempt next year!

Then the cycling santas rode up Midsummer Boulevard to Campbell Park, around the Light Pyramid and back, with a stopover to entertain the crowd outside MK Theatre.

“Everybody knows Santa has a sledge and reindeer, but not everyone knows Santa has a bicycle,” said Ian Revell of MK Community Foundation. “Cheerfully stopping people in their tracks, it was a great way to promote cycling!”

“It was great fun,” said cyclist Naveed Ahmed (left of Mayor in picture below). “I wish I had encouraged more people to come.”