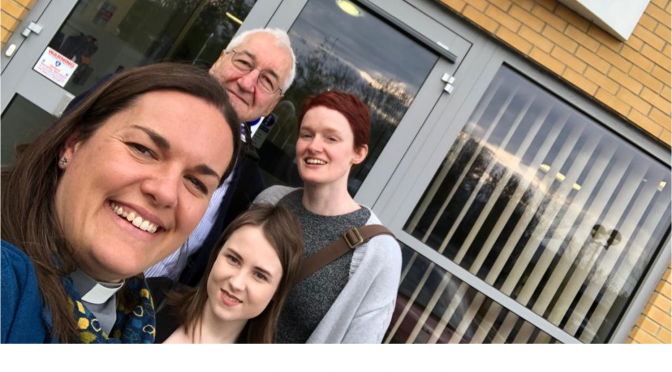 Last September at the Citizens:MK Climate Assembly, the Bishop of Oxford agreed to our request for a meeting to discuss Climate Income (‘the fast and fair way to tackle the climate emergency’) and whether he might use his position in the House of Lords to promote the idea.

He has a very full schedule, so December was the first available date… and then just beforehand, he suffered a nasty bout of Covid. Finally, on 25th April this yea, the meeting took place.

The omens were promising: he had already raised the question of Climate Income in the Lords as a result of the assembly; he had put aside two hours to meet us; and he was bringing two advisors!  All the more reason for the representatives of the campaign team – pictured – to prepare carefully.  We agreed our roles: Catherine would convene, we scripted our contributions, and built a break for 1-2-l conversations into a plan that included reporting back to each other on developments in our climate work since September. We were precise about the two things we would ask for from him.

So what happened?  Lauren presented our first ‘ask’: we wanted to cite him as a supporter of Climate Income and of our campaign, as we took it national through the Citizens network. Would he consent to this?  The reply was immediate – yes indeed, and without the conditions one might have expected (e.g., that statements needed to be cleared through his office in advance).

Then our second ‘ask’: would he invite us to the Lords to a meeting, whether formal or informal, as he thought best, to help increase understanding and support for Climate Income among parliamentarians?

Again he replied positively, though not unconditionally.  Characteristically thoughtful, he said he needed time to consider when and how the meeting could best be ‘anchored’ in the processes of the Lords (and its Climate and Environment committee in particular – of which he is a member).  Then he gave us an important and unexpected bonus  – direct access to his two advisors (both of whom were clearly willing, thoughtful, and very well informed on Parliamentary processes as well as climate issues).

It had been an intense two hours including some lively exchanges around how to bring the need for rising carbon prices into the policy process and public debate.  We left feeling tired but elated – and certainly more powerful. We had strengthened and extended our relationships into the political establishment. We had an important ally for what we see as our next steps – both locally, and working across the Citizens UK network to spread this word and bring other chapters on board, turning it into a national campaign.   All that is needed is lots more hard work! – if you might like to be involved, please get in touch.