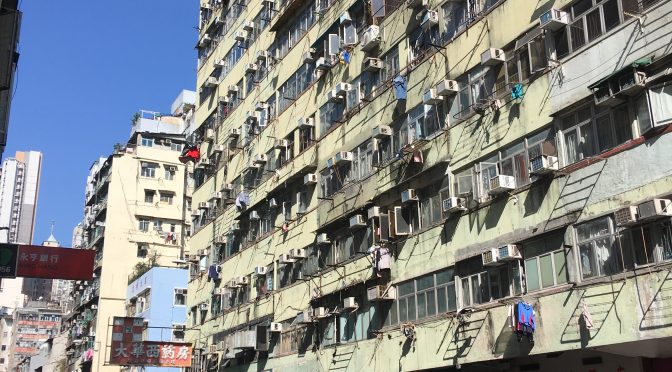 (Photo from a training workshop at a church in Sham Shui Po.)

The local neighbourhood is where politics should begin. The district of Sham Shui Po, where Hong Kong Citizens has built a small alliance of civil society organisations, can become a good test case for Community Organising in action.

In one of Sham Shui Po’s secondary schools, a recently-appointed, innovative and highly-motivated vice-principal is developing a project to promote self-regulated learning.  She has encouraged a small group of 13-16 year old ‘Student Voice’ students to undertake a wellbeing survey. The results show that one third of students said they were unhappy, and the main reasons given were that homework was too long and meaningless, and there were too few opportunities for outdoor recreation and family time.

The Student Voice students have created goals for action this Spring.  They want 1) more interesting homework and 2) a club house, like schools in middle class areas have.  The students researched and developed two goals, each relating to a different power-holder.  They organised meetings with 1) the school principal, to discuss their proposal for shorter and more meaningful homework assignments, and 2) the local district councillor, to discuss their proposal for funding of new recreation facilities and equipment.  These meetings are to be held in March 2020.

This is a good start.  The process of Community Organising can build the power further (see 5 Steps to Change and 3 Habits of Action).

Existing members of the existing Sham Shui Po alliance can be invited to a training workshop where students present testimonies and other evidence of the problem.  Others can be invited.  The more diverse the attendees, the wider the range of experiences, insights, skills and collective leadership they can bring to the issue.

That means doing some research to find out which civil society institutions in Sham Shui Po have power.  List all the institutions – including schools, churches and other faith groups, residents’ groups, etc – then note next to each institution the number of people who you think attend that institution and the money you think it spends each year.  If you want to be sure you’ve got your numbers right, go and ask people inside the institution or, if you can’t get in, ask those outside who no more than you about it.  The internet may help.  The internet may help.

Try to include institutions that wouldn’t normally work together, for example those representing mainland Chinese interests.   People who have moved to Hong Kong are Hong Kongers now.  Talk to their leaders.  If they’re in your neighbourhood, and have a lot of people or money , they may be powerful allies.  Otherwise they may be a powerful force against your interests.

Reach out to ethnic minorities – Indonesians, Pakistani, Nepalese – who often experience injustice, especially in receiving or not receiving mainstream services.  They are rarely given leadership opportunities.  As neighbours, parents, workers and students, they face mental health and wellbeing issues too.  Their stories and different voices can be powerful.

Organise a wider listening campaign to find out what is putting pressure on the students.  Train people to do one-to-one meetings, looking for issues relating to mental health and wellbeing, as many one-to-ones as possible – with neighbours who think blue as well as yellow – to find the common interests. Start by talking about ‘everyday’ matters, not whether or why someone is blue or yellow.

Organise a group to walk around the neighbourhood to see and discuss what they see.  Organise one-to-ones with more people, especially people you don’t normally talk to, e.g. mainland Chinese, children, old people.  Have house meetings to discuss the findings of one-to-ones.  Have workshops to identify common issues and determine SMART goals.

After role-playing in a workshop a scene between a school student and headteacher, a teacher told me there’s no way a student would talk to a power holder like that in real life.  It may not be a learning experience school students often have.  But my experience of talking to school students in Hong Kong suggests they are eager to talk when they are listened to.  They enjoy learning about power by practicing it.  I had lunch with a group of 10 teenagers in a church youth club.  We talked about where the power lies in Hong Kong politics today.  Not all spoke – some focused more on their noodle soup and mobile phones – but most did, and all seemed interested in what was being said.

If you can get 5-15 members from each of two or three groups in a room – e.g. school students, church group, residents group, ethnic minority group – you can use a method of ‘Weaving Trust’.  This involves one group facing another, in two concentric circles of chairs, for a carousel of short one-to-one conversations about what they like and would like to change in their neighbourhoods.  It weaves trust.

Once a variety of local institutions have listened and shared stories about an issue, e.g. church parishioner worried about her child facing intense academic pressure in a different school and an elderly residents group member surprised that today’s teenagers experience so much less recreation than he did at that age, you can refine the issue.

This means prioritising from a list of real issues those which are most ‘worthwhile’ and ‘winnable’ according to the people who are interested to take action to reduce or remove the issue.

Once the issue is clear, and is agreed to be worthwhile and winnable, a small team can research and draft SMART campaign goals to address the injustice.  This will involve doing a power analysis of relevant power holders and the strategy that will get Citizens around the negotiating table with the decision-maker.   This is about channelling anger into constructive action.

Public actions to confront power-holders and prompt a reaction, however small in scale, are essential to community organising.  Taking action is usually the most exciting and memorable part of a campaign.  It should be fun, imaginative (and legal) to encourage civil society institutions to participate in similar actions in future.  For an institution, taking action is like a person taking oxygen.  It breathes life into them.  “No one wants to spend hours in meetings,” a district councillor told me.  “If there are no results, people start to leave, go where they can achieve more.” The aim of an action is to get a planned reaction from the power-holder.  Be humorous, be courageous (not foolhardy), be disciplined and do it together.  Standing up to Hong Kong government means neighbours standing up together.

If a group of students went to the headteacher wearing handcuffs made of rolled up exam papers, it would quickly and humorously present the idea that they feel imprisoned by academic pressure.  Alongside a polite request to discuss a proposal for a new homework policy, it should prompt a reaction from the headteacher of heightened interest in their issue.

A small team of students can rehearse with adults from other institutions and then perform roles together in a negotiation – chair, peacemaker negotiator, timekeeper – in a carefully planned meeting with the principal or district councillor. The negotiating team can try to get the best possible deal, but whatever the outcome, develop a relationship.  After the action, all participants will have been developed as leaders, will have learned about responsibility in relation to power-holders, and will be more confident in respectfully engaging with other power-holders in future.  They will have experience of another method than simply going to the frontline.

These are a few ideas Hong Kong Citizens can use to build power around the school’s internal issue, to share with neighbouring organisations who experience similar issues or different aspects of the same issue, and build broad-based power for local action.