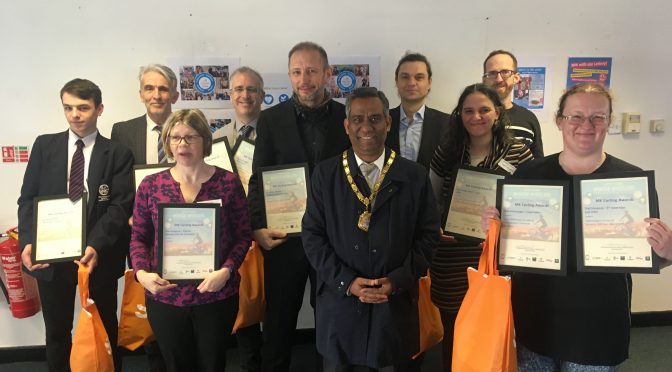 On 17th February, MK business and school leaders met to celebrate the winners of a Winter Wheelers cycling competitions, and discuss next steps in helping MK to become the UK’s leading cycle city.

Following the presentations, Andy Damerum of Red Bull Racing and Angus Mackay of Nissan Technical Centre Europe talked about the personal and corporate benefits of cycling, and Adekunle Odunewu of Realsolid Media showed a Cycling CitizensMK video featuring the Principal and students of The Hazeley Academy. Then Jim Parker, Executive Principal of Lord Grey School and Stantonbury School, spoke about why cycling is good for his students and how the school promotes it. He talked about the importance for cycle promotion of building students’ confidence in their bike ability and how the mechanics of a bicycle can be good for student learning too. Jim also noted that more must be done to encourage girls to cycle to school.

Ian Revell, of MK Community Foundation and Venkata Krishnan of the Sai Shital community spoke of the benefits of cycling to voluntary sector organisations.

Message from John Lewis: John Lewis & Partners are fully supportive of  regular cycling commutes as it does make for happier, healthier and wealthier partners. Cycling is fun to do in non-working hours too and it gives a real sense of freedom and the exercise can help to burn off the calories and stress. We will continue to donate vouchers for the award winners and we will be encouraging more of our partners to join in with ‘Cycling Citizens’.

Other certificates to be collected (from table) – Top Rider in Company