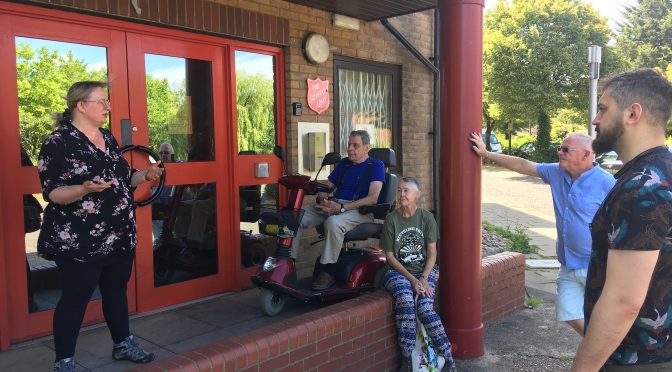 After the walk, Clare (pictured outside the entrance to Life House above), wrote, “How great it was to get to know you all and hear your interesting talks about each institution”, and reached out to offer marketing support to Mike and metal fabrication support to Don.

A Community Walk part 3 is being planned for September. 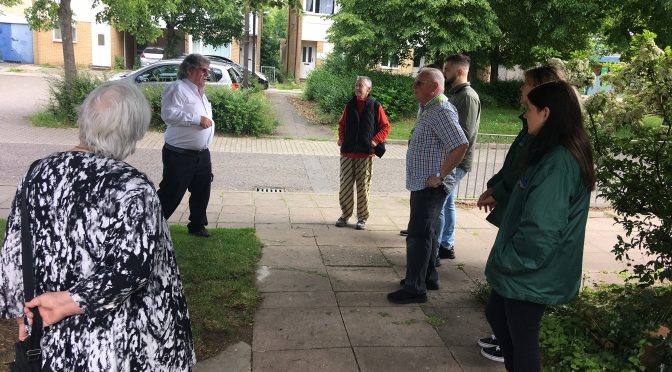 Nine leaders from Fishermead institutions took part in a Community Walk to find out from one another how they see life and times in Fishermead.

The group stopped off at the Seventh Day Adventist Church, Pebbles Nursery (pictured above), the playing field, Campbell Park Parish Council office (main picture), Frank Howe Court and the Chinese Overseas Christian Mission, to hear from leaders at each institution what they do and why, what they see and what they think about it.

Mike Kelly, Director of Samaritans MK, said: “I was really impressed by the strong sense of community support within Fishermead and the range of work being undertaken by the voluntary and other sectors in support of local residents.”

One of the issues discussed during the walk was car speeds. Walkers observed one particularly hazardous pedestrian/cycle crossing at the junction of Pentewan Gate and Child’s Way (pictured below), which is unmarked.

The Community Walk will be continued on Friday 15th July at 10am. If you’re interested to join, please contact Ruth Legh-Smith. 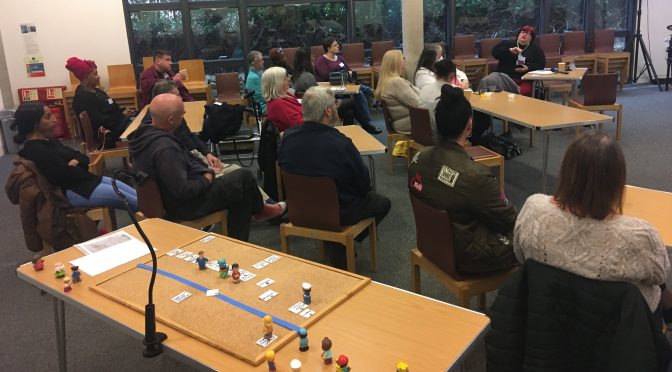 Following a live BBC Look East broadcast from the Trinity Centre earlier in the week, they wanted her reaction to their agenda for change developed at a Delegates Assembly in March.

The Assembly was hosted by the Chinese Overseas Christian Mission on Pentewan Avenue, Fishermead, and began with a welcome from Eric Shan Lin (above) followed by a moment of silence in memory of local Cllr Carole Baume, ‘a special kind of politician’ who recently died.

Representing the local Council electoral candidate from the Labour Party, who was unable to attend, and in the absence of Conservative and LibDem candidates who had also been invited, sitting Councillor Fuller was asked to respond to a series of questions about Road Safety, Crime, Community and the Environment (see below).

Councillor Fuller responded positively to all the asks and pledged to work with the developing Fishermead Citizens Alliance to achieve its goals. She said: “For me this is about building a relationship with you. I am more than happy to represent and advocate for you. I just need you to tell me what you need. I personally commit and (if she is elected) I am sure Amber will too.”

Cllr Fuller’s support was welcomed and it was agreed there would be follow-up meetings with her.

In post-event evaluation, leaders gave a score of 8 out of 10.

Hear audio of the Assembly (with thanks to Eric). 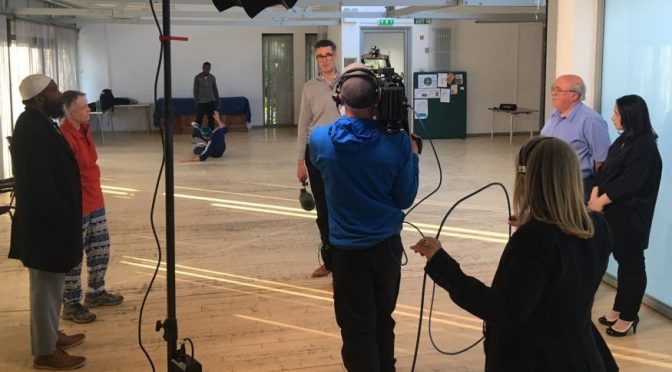 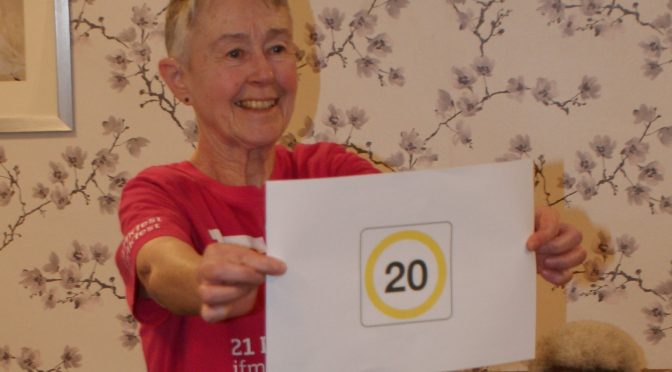 As the building of the Fishermead Citizens alliance progresses, 23 leaders from eight Fishermead institutions and six guests attended a Delegates Assembly at Frank Howe Court to plan actions on four issues affecting residents and workers in Fishermead: Road safety, Crime, Community and Environment.

After an introduction and short speeches from Rev Ian Herbert of Trinity Church, and Derek Stanley, a guest from Unity Park (provider of services to the homeless), and a written update from the Neighbourhood Police Team presented by David Hart of Fishermead Community Association, delegates were asked to join breakout groups to plan actions on each of the four main issues.

It was agreed that a sub-group of Fishermead’s institutional leaders trained by Citizens UK would organise a meeting with the candidates for MK Council’s Woughton & Fishermead ward one week before the election. This meeting will take place on Thursday 28th April, 6.30pm at Chinese Overseas Church Mission on Padstow Avenue.

In a post-Assembly evaluation, delegates agreed a score of 9/10 for the Assembly, noting that the turnout of attendees could have included leaders from other invited institutions, e.g. the two Fishermead schools, if the event had been held on a weekday evening rather than a Sunday afternoon. Thanks were given to Frank Howe Court for hosting so warmly and to resident Ruth Legh-Smith for contributing substantially to organising it.

Fishermead Trinity Community Centre now has fast speed connection to the internet and is a step closer to its vision of providing an internet cafe for local residents. Technicians from Bletchley-based Lynx Networks Plc laid the cables as an in-kind donation to the Centre agreed between Lynx MD Alan Bullen and Trinity Centre trustee Heinz Elbers.

“Business is a little light for us this mid-winter and we’re pleased to put our spare resources to a good cause,” said Alan Bullen. “We can see the value of providing an internet cafe here.”

“It’s a huge boost to our vision,” said Heinz Elbers. “i couldn’t believe it when I explained the problem and Alan just said yes we can help. This is a good news story for business and community working together.

“With many thanks to Lynx Networks for the network cabling installation and the partnership with Vodafone to provide their Gigafast fibre-optic connection we can now offer the perfect location for computer-based training courses, as well as the ad-hoc zoom call, after-school clubs for online homework or even network games. As opposed to an often poor and unstable wi-fi connection, all halls can now provide a gigabit network connection. This is part one of a wider story as the cabling outside the office is the first big step towards our Digital Inclusion pilot project. ”

Centre trustee Don Mahon said: “It’s been really hard up to now because the only reliable connection was in the office, so we could only help one or two users at a time. Now we can get internet anywhere in the Centre, even in the hall here where we hold church services on Sundays.”

Lee Wootton, lead cabler for Lynx, said: “it took us longer than we initially expected, getting around the brick and glass in the building. But at Lynx we pride ourselves on sticking to our word, and it’s been enjoyable to deliver this. it’s good for us to do good.” 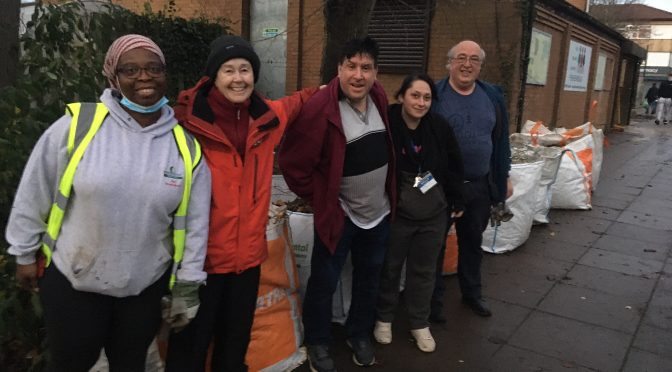 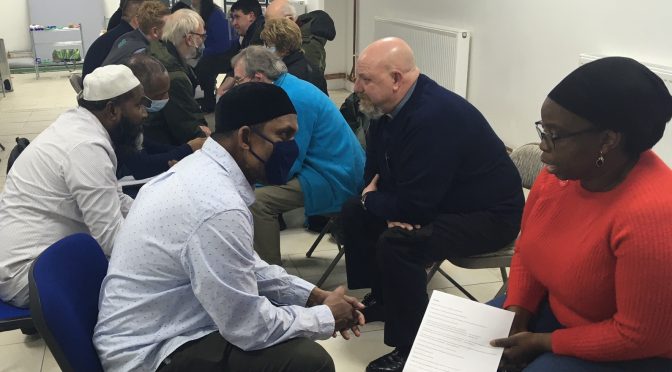 After a welcome from Mosque President Thajudeen Lebbe, three Fishermead leaders took turns to talk about their recent experiences of community organising and training with Citizens UK. David Hart of Fishermead Community Association talked about his experiences of 3-day training, Rev Ian Herbert of Trinity Church talked the digital inclusion campaign and Ophelia Cole of Action Speaks talked about a recent action to clear overgrown vegetation from the entrance to Willows First School.

There was then a Weaving Trust carousel of 4-minute 121 conversations on ‘who are you and what issues would your institution like to see action on to improve Fishermead?’ (photo above) facilitated by Sophie Richens, a volunteer at Fishermead Trinity Centre.

Then each institution took turns to present to the whole group the issues of greatest interest to them and their followers, facilitated by Ruth Legh-Smith of Frank Howe Court, and these were recorded (below).

Finally it was decided that an action team of eight leaders (listed at bottom left in photo above) would work together to research and craft one or more campaign proposals to present to a Delegates Assembly, with a target turnout of 5 delegates per institution, hosted by Fishermead Trinity Centre at 2.30pm on Sunday 20th March 2022.

In a post-event evaluation, the Leaders Forum was scored 6 out of 10 due to absence of school leaders and some difficulty hearing one another during the Weaving Trust conversations.

7.30 Weaving Trust carousel of 5-minute 121 conversations on ‘who are you and what issue(s) would your institution like to see action on to improve Fishermead?’ – Sophie Richens

7.55 Sharing of issues – leaders from each institution take turns to present Fishermead issues of greatest interest to them and their followers – Ruth Legh-Smith

8.10 Discuss and decide on issues for research action

8.25 Agree time and location of Delegates Assembly in Feb/March

Clothing: There is no need for women visitors to wear a head scarf.

Covid: For your own and others’ safety, you may wear a face covering.