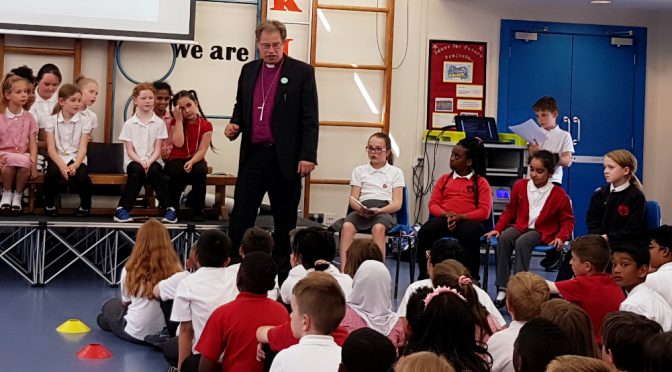 The Bishop of Oxford, Rev Steven Croft, joined other guests from  Arriva Buses and Thames Valley Police in an assembly organised by the children of Summerfield Primary School to launch a schools’ poster competition to combat hate.

The poster competition has been overseen by the Open University, who have created the rules and will be holding an exhibition of the children’s work from 12th July with an finale Awards event on 19th July.   Click here for competition rules.

Running the competition was one of the goals set by the Citizens:mk Fight Against Hate campaign which several power-holders signed up to at the 2017 Accountability Assembly.

Pupil Noorah, aged 9, said: “We often hear about wars in other countries as well as conflicts in England. There are many times when even in this city we love so much, harmony is replaced by hate. ”

The school choir showed its love of Milton Keynes and desire to support the Fight Against Hate campaign by singing their own song ‘We Built This City’.

Jiten Patel, a member of the campaign team who works for The Open University, said:  “Summerfield School can be proud of their student who were excellent ambassadors.  They are a credit to their school and left the guests at the launch with a strong impression of the values that are being lived by Summerfield.  The head teacher, staff and parents can rightly be proud of their students.”

Head teacher Pam Weston said:  “The children thoroughly enjoyed the opportunity to share their ideas and perform for their visitors. The responses of their ‘VIP’ guests made them realise that they do have a voice and will be listened to when they contribute on issues of local and national importance.”

Fidele Mutwarisibo, chair of the Fight Against Hate campaign, said:  “The moment I stepped into Summerfield I knew this mini assembly was going to be great.  The welcome by the Heateacher, the staff and the pupils was second to none.  The presence of the Bishop of Oxford, the representatives of the Police and Arriva Buses highlighted the timeliness and relevance of our campaign.  The presence of Summerfield’s governors highlighted the importance of partnership.  The leadership of pupils was reassuring.  My lasting memory from this enjoyable event was how very impressive the pupils were. They made a huge difference.”

To thank the guests for attending the assembly, the children gave each guest a box of fresh eggs laid by the school’s own hens – and served them with slices of amazingly delicious cake made with eggs from the hens.