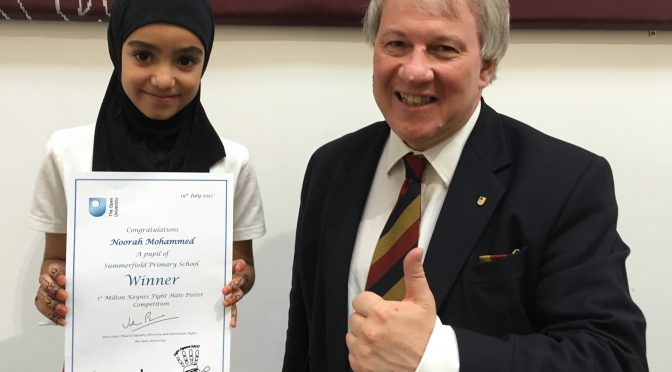 Noorah Mohammed, Year 5 pupil at Summerfield Primary School, has been awarded first prize in the ‘Fight Against Hate’ campaign poster competition.  The runners up were Frankie O’Connor of Great Linford Primary School and Fariss Kapaga, also of Summerfield School.

The competition was sponsored by Arriva Buses, represented by General Manager Kieran Lawson, and The Open University, who hosted the awards event.

“We are proud of what the pupils have done to raise awareness of this very important issue,” said Lucian Hudson, the OU’s Director of Communications.

“It is good for Arriva to be doing something for the wider community,” said Kieran Lawson.  “I have no doubt we will be working together on this important issue in the years to come.”

“We are delighted to have two winners from our school,” said Pam Weston, Headteacher of Summerfield.  “We want to carry on with this important campaign next year.  Our school is located in a very mixed area of MK and we love to be part of it!”

The Summerfield children’s choir sang ‘We Built This City Called Milton Keynes’ and a specially commissioned new song, ‘Love Is Stronger Than Hate’.  Click here to hear Nikki Elgar and the Summerfield School Choir on BBC Three Counties Radio (1hr 50mins and 44secs into the show).

“We’re all different but we’re all the same on the inside,” said Nikki Elgar of Summerfield School.

“The Open University has an ongoing commitment to this campaign,” said Jiten Patel, the OU’s Head of Equality, Diversity and Information Rights, who organised the poster competition.  “Let’s make hate history.”

Pictured above are Noorah and Lucian Hudson, who presented the award.  Pictured below is the Summerfield School choir in full voice. 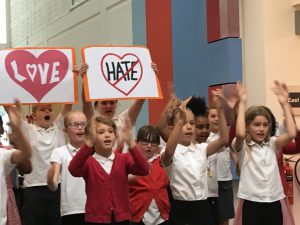