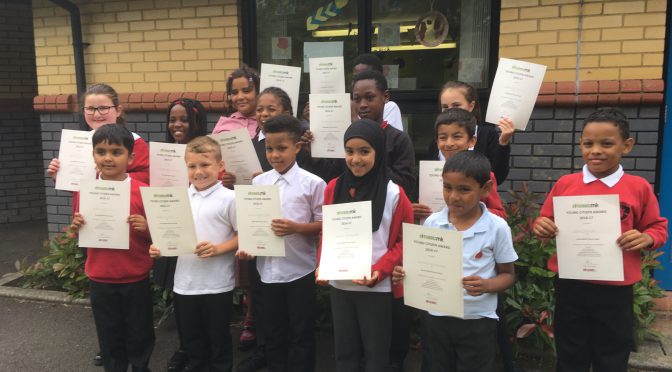 From 12th to 19th July, The Open University is hosting an exhibition of children’s art work to raise awareness of hate crime.  In a campaign organised by Citizens:mk, posters created by pupils from four MK primary schools will be judged by a panel including Arriva buses, whose marketing manager has agreed to display Fight Against Hate posters on MK buses this Autumn.  The poster competition was launched by the Bishop of Oxford in May.

Lucian Hudson, Director of Communications at The Open University and Chair of Citizens:mk, said:  “The Open University is delighted to be hosting this exhibition.  Raising awareness of how hate crime affects us all  is important to our shared vision of MK as a thriving, more inclusive and fairer MK.”

Sophia Kibirige, Treasurer of MK Muslim Association and School Governor at Summerfield Primary School, said:  “This competition is a great way for the children to express their natural kindness and show how much they want to live in a community without hate.”

At the competition awards event on 19th July, the Summerfield School choir will perform a song written especially for the campaign, ‘Love not hate’.  Prizes for competition winners include Apple computers.

Fidele Mutwarisibo, member of Church of Christ the Cornerstone and leader of the Fight Against Hate campaign, said:  “Raising awareness through this poster competition is one of our four goals for the campaign in its first year.  I am so pleased that we are all getting a chance to see and hear how much the children of MK care about this issue.”

To see and hear the pupils’ views and voices, sign up to attend the Poster Exhibition & Awards event at The Open University on Wednesday 19th July, 10.00-11.30am (arrival from 9.30).  Contact Jiten Patel, organiser of the competition,  jiten.patel@open.ac.uk .

(Pictured above are pupils of Summerfield Primary School Council after receiving their ‘Young Citizen 2016-17’ awards at the end of June.)