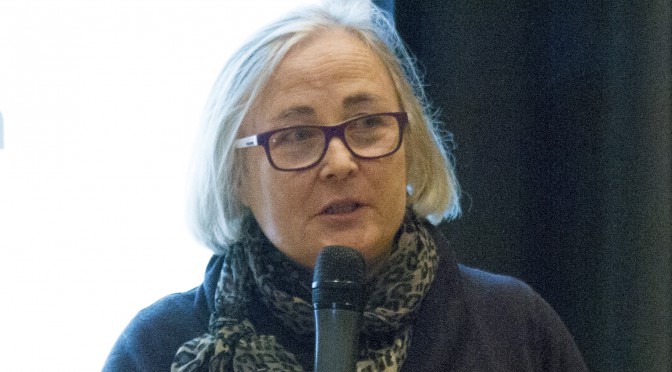 “I did not know anyone of the attendees prior to the course.   I found everyone to be pleasant, encouraging, appreciating each other’s area of interest. I met a number of people whom I found interesting and valuable.

“The first day was mostly getting to know the group, both by the leaders and the other members of the group.   We were spoken to by various people had considerable experience of working within Citizens UK, but they were also very well versed in the history of how this movement came about in the US due to one man seeing the need for a voice of the people to be heard and acted on by voluntary groups.  The worldwide dimension of this talk added considerably to the kudos and power of the Citizens method.

“Our first exercise was a really interesting group activity.   We were divided into to teams of 3 people on either side of a table. We had to debate the rights and wrongs of a particular inter-country dispute.  If we had all read the paperwork which had been sent out before the sessions, the debates might have been shorter and the understanding more effective, thus coming to a quicker solution of the issue.  This resonated with me from the point of view of when one is trying to visit a company or organisation to discuss with them to follow a path that Citizens might champion.  Knowing something about the person with whom you intend to engage is vital.  Preparation is important in all these situations, even when asking general and casual questions within our own communities.

“The above exercise was repeated a sufficient number of times to ensure everyone in the room had a chance to give their opinions and solutions to the situation.  I believe that the vast majority of the participants found this exercise difficult due to lack of preparation.   But the exercise was interesting and useful.  It pointed out the need to identify the leader of the group with whom you are engaging; it is not always the allocated leader.  We have a requirement of being respectful in our exchanges in order to gain the confidence of the opponent’s representative and to develop a rapport with the opposition. We should see people not as enemies, but as potential partners so that we can overcome any possible difficulties to bring the opposition on board with our ideas. This would enable us to direct our efforts effectively.  We need to make sure that members of the team understand their role and that of the group in general.

“During the programme at the OU, we had a number of workshops, small presentations etc. which were primarily intended to develop the groups’ understanding of how to build the skills and tools for discussions, interviews, and general interactions with people of interest, e.g. Heads of large companies and Charity groups, on a one-to-one basis to glean appropriate information about their background and understanding of what the Citizens groups are about, and looking for potential members and leaders as possible assistance to their local Citizens group.

“The were an number of effective workshop run, but one in particular which I got a lot from, was on how to identify the leaders in groups and therefore the people with which to engage, the groups the Citizen group could possibly help with local issues and to increase membership of the Citizen group locally. We were asked to identify the leaders in the groups we were part of.  I learned it is not always the most obvious person who is the most important with regards to engaging a local group, church, school, sports groups, etc.”